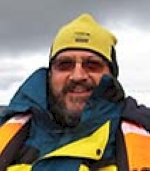 Jean-Pierre Féral Research Director Emeritus at CNRS, initiated and launched the IPEV program PROTEKER of which he was the P.I. from 2011 to 2015. He made a PhD of biological oceanography and is Docteur ès Sciences Naturelles (ecophysiology). His current research interests are: (i) the study of the origin, the maintenance and the erosion of biological diversity according to the environmental conditions and the dispersal capacities of the organisms, in continuous and insular marine ecosystems, (ii) to build hypotheses on processes of speciation in relation to the modes of development, thanks to population genetics, (iii) the phylogeography and phylogenetics, associated with the history of the oceanic basins which make it possible to test models of speciation and to propose scenarios of evolution of the biodiversity, on various time scales.He is trained for scientific diving (CPS – CNRS scientific diving chief), member of the French national committee for scientific diving – CNPS in which he represents the French Polar Institute and also representative of France in the MARSnetwork European Scientific Diving Panel – ESDP, He is chairing this committee since 2016.CV | Google Scholar | Research Gate | Publons